Now You See Me 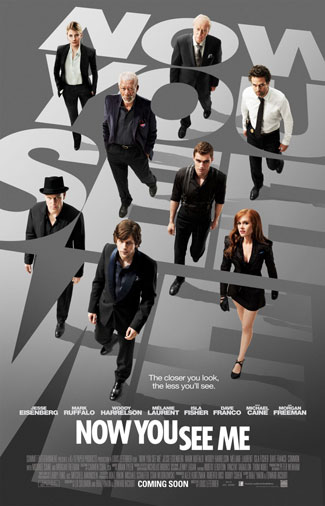 The More You Look, The Less You See

The Four Horsemen’s show at Las Vegas’ MGM Grand, with the help of a wealthy impreario Arthur Tressler (Michael Caine), included transporting an audience in a bank vault in France, then leaving away with 3 million euros, and showering the money onto their audience.

FBI agent Dylan Rhodes (Mark Ruffalo) and Interpol detective Alma Dray (Mélanie Laurent) was assigned to solve the theft case. Dylan teamed up with a magic-debunker Thaddeus Bradley (Morgan Freeman) in order to find the secret behind the act. Thaddeus deduced that the group stole the money weeks before. Left without any hard evidence, Dylan and Alma continued to chase the quartet.

In New Orleans, Tressler’s bank was emptied as part of the group’s finale. The money was distributed to the people whose insurance claims had been denied by Tressler’s company. Puzzled and infuriated, Tressler hired Thaddeus to humiliate the Four Horsemen by revealing their secrets on their next performance.

Yet another sum of money was stolen in a safe before the last performance of the group in New York. The robbed money was left inside Thaddeus’ car which caused him to be put in prison. Later on, he found out that Dylan was the fifth Horsemen. Thus, leaving others step behind the investigation.

At the end, Dylan disclosed that he was the son of Lionel Shrike, a magician who died drowning because of his failed magic trick. In order to avenge for this father, he designed the Horsemen to punish those who were involved: Thaddeus, who embarrassed the late magician; Tressler’s company and the French bank, which refused to grant insurance for his father’s death; and the company which constructed the safe used by his father on the trick. The safe, made with inferior quality of metal, warped during the show which cause Lionel’s inability to escape it. In the last minutes, Dylan revealed himself to the Four Horsemen. Alma found out Dylan’s involvement in the case but decided to leave things unanswered.

My Review:
I forgot to tell myself that I should think that these people really possess special talent and they can do those unbelievable magic tricks not because they were in a movie and computer effects leveraged their expertise but because they really can. Oh I spoiled it!

Even though we are in a technology age and with the help of advance gadgets they can create sophisticated magic tricks, some of those magic tricks in the movie were not really possible, some of which they can only do if they were a real wizard like Harry Potter. To support my protests, think about Henley flying in the mid-air with the help of a big bubble made by Daniel. Do you think that thin sphere of liquid can really support her? The Four Horsemen’s tarrot cards formed into one then revealed the eye and made another card on a tree glow? Or when Dylan escaped inside Thaddeus’ steel of bars jail in a split second. The figures on the paper changed in real time during the show with the help of a flash light; the numbers depend on their bank account savings. The last time I saw a magic like that, it was Harry Potter with his quill writing on Tom Riddle’s diary. The Four Horsemen were magicians, persons who perform magic tricks for entertainment. They were not warlocks, wizards or witch; they don’t have those supernatural powers but why the hell the movie made them look like one? I might accept those tricks if in the end they revealed how they did it or how the technology made it but unfortunately they didn’t. Or if they got a special stone somewhere or if their mysterious benefactor gave them paranormal powers, that would be ok. But that didn’t happen. They weren’t granted with those things. Some acceptable magic tricks were the teleportation of the man in a French bank’s vault, which in this case a fake bank vault under the stage; Merritt’s hynotism and mind reading ability; hiding of a safe behind a big mirror; Daniel making bubbles by his hands; and so on.

I was astonished by Merritt’s skill of mentalist and hypnotism. If ever someone like him really exists, I would likely distance my self than make friends with him. Who knows? He might hypnotize me to do things or divulge personal secrets. But if that was one especial skill I was born with, hmmm… I think that would be awesome! Reading people’s mind would be an easy way to know them better. Tell thousands of lie but I would always know the truth. Wasn’t that nice but quite sad? When people tell you they love you but in reality they don’t and what you could only do was to hold on to what they said and not think about the bitter reality your mind reading ability gave you. Anyways, let’s move on. Others’ abilities were also cool.

The ending was disappointing. It did not captivate me. I thought there was a breath-taking inevitable twist that would justify the Four Horsemen’s or rather the Five Horsemen’s action throughout the film. Dylan’s dark secrets and hidden agendas were weakly revealed during the final minutes. And what happened to the Four Horsemen after they joined Dylan in the carousel? Did they ride on the horses for the rest of their lives?

Watch The Prestige, a film that can amaze you, entertain you and at the same time make you think. Though the magic tricks used in this film were usual and familiar, the theme of spending a magician’s whole life to perform a trick or set of tricks was infinitely better handled. Compare The Prestige with Now You See Me then tell me what you think. Which is more enganging and interesting?

Lastly, did I look closer which made me see less?